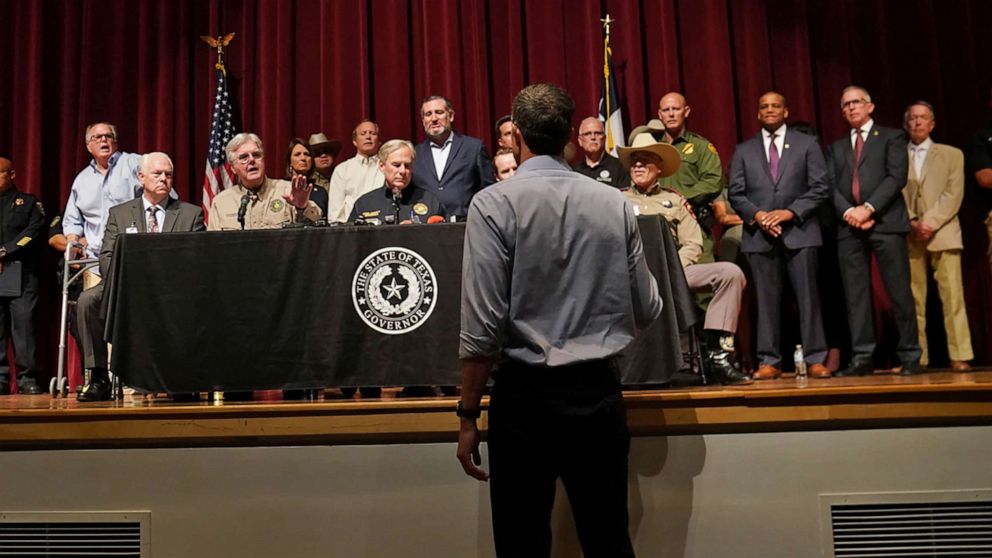 Former Rep. Beto O’Rourke, D-Texas, interrupted a press conference from Texas Gov. Greg Abbott about the Uvalde shooting Wednesday, shouting at the current governor before being escorted from the auditorium.

He said the response from Abbott and other Texas leaders was “totally predictable,” and did nothing to solve the problem easy access to guns that is plaguing communities across Texas and the nation.

Abbott ordered law enforcement officers to escort O’Rourke, who is running for governor, outside the building.

Several attendees on the stage, including Sen. Ted Cruz, R-Texas, began yelling back, telling O’Rourke to sit down, that he was “pathetic,” and that this was no place for politics.

Following the outburst, Abbott resumed the press conference, saying, “Every Texan, every American, has a responsibility we need to focus on ourselves and our agendas, we need to focus on the healing and hope that we are providing to those who suffered unconscionable damage to their lives.”

The governor went on to say that state laws that allow 18-year-olds to purchase long-barrel rifles have been on the books for 60 years. He said the only new aspect that is driving mass shooting is “the status of mental health in our society.”

“He’s refused to expand Medicaid, which would bring $10 million a year, including mental health care access for people who need it,” O’Rourke said. “He’s refused to champion red flag laws. … He’s refused to support safe-storage laws so young people cannot get their hands on their parents’ weapons.”

Growing angrier with each word, O’Rourke said, the gunman “who just turned 18, bought an AR-15 and took it into an elementary school and shot kids in the face and killed them.”

“Why are we letting this happen in this country? Why is this happening in this state? Year after year, city after city,” O’Rourke said. “This is on all of us if we do not do something and I am going to do something and I’m not alone. The people of Texas are with us, the majority of people in Texas are with us. Well, we’ve got to stand up to this.”

He continued, “We just can’t accept this theater or business as usual, and accept the next shooting.”