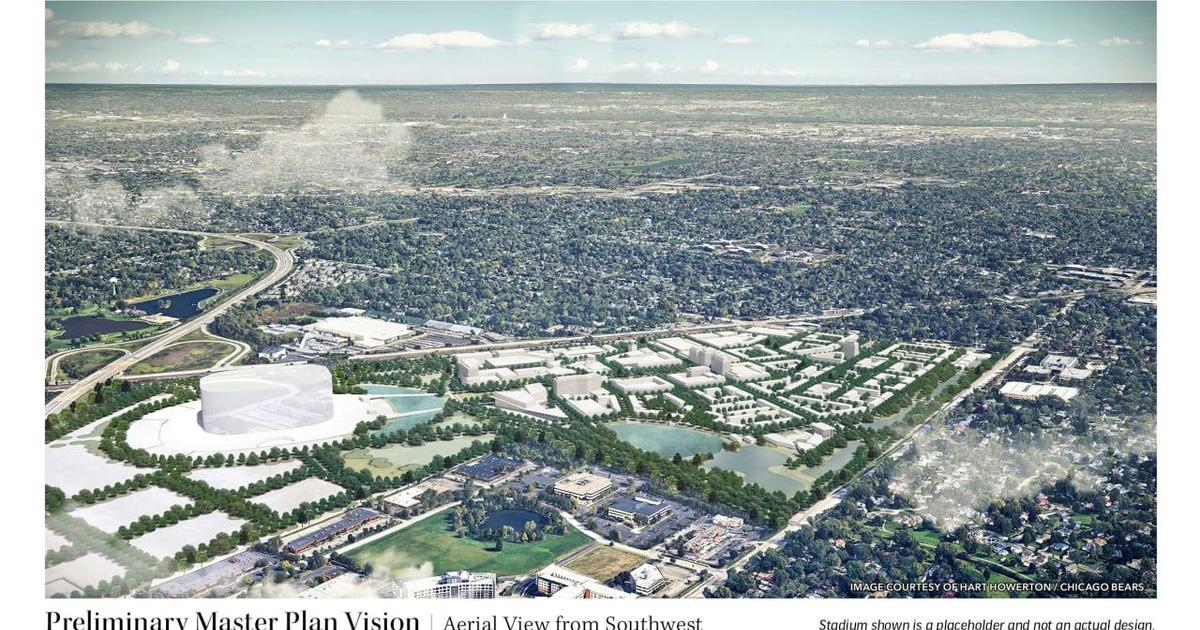 “‎While the Bears will seek no public funding for direct stadium structure construction, given the broad, long-term public benefits of this project, we look forward to partnering with the various governmental bodies to secure additional funding and assistance needed to support the feasibility of the remainder of the development,” the team said in a statement on their website.

Last year, the Bears signed a $197 million purchase agreement with Churchill Downs for the 326-acre site of the former Arlington Park racecourse, and remain in negotiations on a contract for the site.

“‎If the team does proceed with the purchase of the Arlington Park property, and if the Bears organization then chooses to proceed with the development of the property, the project will be one of the largest development projects in Illinois state history. We envision a multi-purpose entertainment district anchored by a new, best-in-class enclosed stadium, providing Chicagoland with a new home worthy of hosting global events such as the Super Bowl, College Football Playoffs, and Final Four,” the team said, confirming for the first time their vision for a stadium would be domed.

The team’s statement included three conceptual drawings of the project and an aerial map of the development, which would include hotels, restaurants, and open spaces.

While the renderings don’t show an actual design for a stadium, the Bears also have scheduled a community meeting for Thursday night in Arlington Heights to unveil conceptual plans for the project.

Soldier Field remains the home of the Bears this season as it has been since 1971. It was under preparation for the Bears’ season opener against the San Francisco 49ers on Sunday.

The San Francisco 49ers happen to be one of 10 NFL teams with a home stadium not located in their namesake town. They play in Santa Clara, California.

If the Arlington Heights plan goes ahead, the Bears will join that club in the next four to five years. SportsCorp Ltd. President Marc Ganis expects it to happen.

Tye: “One to 100, how likely are the Bears to move to Arlington Heights?”

Ganis: “Ninety-plus. The Bears moving to Arlington Heights is their future.”

The Arlington Heights site is adjacent to train lines, highways, and a village used to hosting events with tens of thousands of people regularly.

“The Bears could not have put a pin on the map anywhere in the area that is more perfect than where Arlington Park is,” Ganis said.

Ganis has worked projects with two-thirds of the teams in the NFL. He says for Bears season ticket holders, there is a precedent for what happens for owners of personal seat licenses, or PSL’s, that guarantee Soldier Field seats.

Ganis added that the use of taxpayer money not for the stadium, but for the larger complex, is a funding model other teams regularly use.

“They’re now actually following a well-traveled pattern, and they know how they can do it within a certain dollar amount,” he said.

Mayor Lori Lightfoot has continued to hold out hope of keeping the Bears in Chicago. Hours before the unveiling of the potential Arlington Heights plan, Mayor Lightfoot addressed the issue.

“As you know, I’m somebody who likes to plan, so we’ve got Plan B, Plan C, and others in the works as well, if the Bears decide they’re going to abandon the city of Chicago,” Mayor Lightfoot said.

Ganis seized upon the mayor’s use of the word “abandon.”

Ganis said Mayor Lightfoot does not want to be the mayor who becomes known for letting the Bears go.

“Political CYA-type language – and that’s what we’re seeing going on here. She doesn’t want this to happen on her watch,” Ganis said. “By the way, this may not have been her doing. It could have happened under anybody’s watch who was in City Hall.”

In July, the mayor she unveiled three options for renovating Soldier Field, including a possible dome over the lakefront arena.

The options include rebuilding both end zones and enclosing the stadium with a dome; renovating the stadium to make it dome ready; or modifying Soldier Filed into a multi-purpose stadium better suited for its other major sports tenant, the Chicago Fire FC, as well as concerts and other year-round events.

All three options would preserve the stadium’s iconic colonnades, while expanding capacity from 61,500 seats to 70,000 seats.

According to the mayor’s office, the plans also would increase the number of luxury suites from 133 to 140; add six new club areas; quadruple concessions areas from 50,000 to 200,000 square feet; expand the opportunity for stadium naming rights and other sponsorships, and create more flexible event space, with up to four separate venues, with capacity ranging from 5,000 to 60,000 seats.

The mayor’s office estimated the costs of the three options would range from $900 million to $2.2 billion, but other than expanded naming rights, has yet to say how the city could fund the renovations.

Tuesday morning, Lightfoot said the team’s plans to unveil conceptual plans for an Arlington Heights stadium won’t affect her efforts to keep the Bears at Soldier Field, saying she still believes the city will “make a very compelling case for them to stay.”

Chris Tye is a reporter and fill-in anchor at CBS2 Chicago.