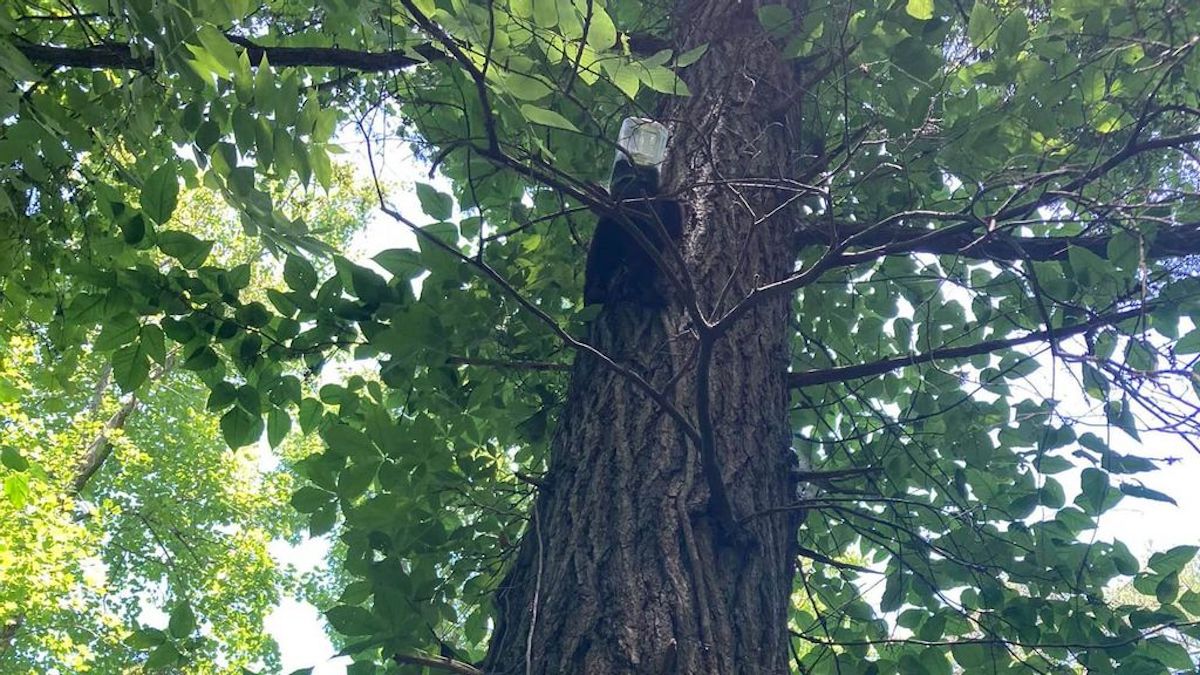 A bear cub was saved by wildlife experts after they spotted it with its head trapped in a cheese-ball snack container.

The container was screw-top and had slipped over the young bear’s head, stopping it from eating or drinking.

Images of the cub’s rescue show it climbing up a tree in Wears Valley, Tennessee, with the container jammed on its head like an old-fashioned space helmet.

The Tennessee Wildlife Resources Agency (TWRA), which organized the rescue on Monday, said the bear was trapped for at least a week.

The TWRA said in a statement obtained Tuesday: “Black Bear Support Biologist Janelle Musser was able to rescue a black bear cub who had gotten its head stuck in a plastic food container yesterday.”

“The bear was first spotted on June 13 in Covered Bridge Resort in the Wears Valley area of Sevier County. In the following days, TWRA and Appalachian Bear Rescue did surveillance and followed incoming calls attempting to locate the bear.

“A call came in yesterday that it had just been spotted and Janelle and ABR located the cub part way up a tree. A local business brought a ladder and she was able to climb up and put a catch pole around the container.

“Once there was tension on the container, the bear was able to pull its head out.

“ABR then monitored traps, caught the bear, and are helping it recover at their facility.

“Janelle says to be ‘Bear Wise’ and always secure your garbage and recycle or crush these types of containers.”

Experts said the cub had originally been seen with an adult female, probably his mother, but she had disappeared.

Tennessee Wildlife Resources Agency came to the rescue of a black bear cub on June 20, 2022, after its head got stuck in a plastic food container.
@tnwildlife/Zenger

The bear was under 30 pounds in weight and because it was unaccompanied by an adult, it was taken back to the group’s facilities for treatment and rehabilitation.

TWRA spokesperson Matthew Cameron said the container probably had been used for cheese balls or pretzels.

TWRA also advised residents to keep trash secured and to crush down any large plastic containers for recycling.

According to the National Park Service, which manages the Great Smoky Mountains National Park in Tennessee, it is illegal to willingly approach within 150 feet of a bear or any distance that disturbs or displaces a bear.

The park authorities note that approaching a bear may cause aggressive behavior on its part, such as running toward you, making loud noises, or swatting the ground with its paws. They recommend slowly backing away and watching the bear, and increase distance from it without running.