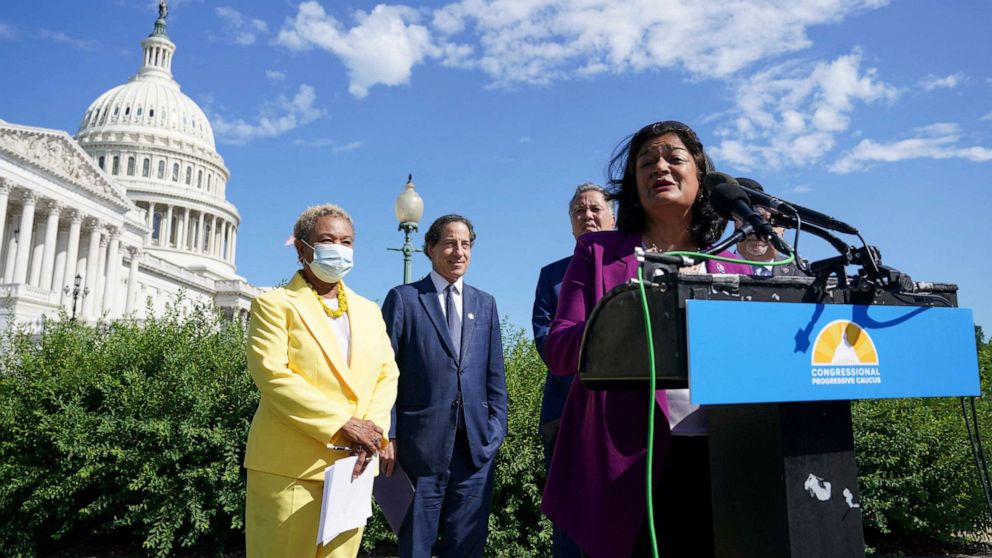 House progressives on Tuesday retracted a letter they sent Monday to President Joe Biden in which they urged him to directly negotiate with Russia on an end to the war in Ukraine, now in its ninth month.

“The letter was drafted several months ago, but unfortunately was released by staff without vetting,” Progressive Caucus Chair Pramila Jayapal, D-Wash., said in a statement Tuesday. Jayapal said she accepts responsibility for its release.

Minnesota Democrat Ilhan Omar confirmed in a statement to ABC News Tuesday that the 30 progressives wrote the letter over the summer “in response to reports that Ukraine was being pressured by Washington not to negotiate.”

The retraction follows backlash from both Democrats and Republicans, including House Speaker Nancy Pelosi. It also comes less than a day after Jayapal clarified the letter’s meaning after initial criticism from lawmakers.

“Let me be clear: we are united as Democrats in our unequivocal commitment to supporting Ukraine in their fight for their democracy and freedom in the face of the illegal and outrageous Russian invasion, and nothing in the letter advocates for a change in that support,” Jayapal said Monday. “Diplomacy is an important tool that can save lives — but it is just one tool.”

When asked if the White House advised the Progressive Caucus to retract the letter, White House press secretary Karine Jean-Pierre on Tuesday declined to comment on the letter.

“We appreciate the bipartisan effort,” she said about funding for the war effort to date, “and we are going to continue to be in conversations with members of Congress on how to continue to move forward in order to support Ukraine in their efforts,” Jean-Pierre said at her daily press briefing.

Speaking Tuesday, Pelosi vowed that Ukrainian aid would be included in an end-of-year funding bill. While the progressives who penned the letter urged direct talks with Russia, none of them have opposed more aid for Ukraine.

“Congress has secured over $60 billion in security, economic, humanitarian and budget assistance for Ukraine,” she said at an international aid conference summit in Zagreb, Croatia. “And more will be on the way when we pass our omnibus funding bill this fall.”

In her remarks, Pelosi made it clear that the U.S. will continue defending democracy in Ukraine “until victory is won.” Those comments make her the highest-ranking Democrat to seemingly buck the Progressive Caucus’ message, which other Democratic lawmakers have criticized.

Arizona Democrat Rep. Ruben Gallego pushed back on the letter on Twitter, saying, “The way to end a war? Win it quickly. How is it won quickly? By giving Ukraine the weapons to defeat Russia.”The letter also ruffled feathers among some who signed it. “I signed this letter on June 30, but a lot has changed since then,” California Democrat Sara Jacobs tweeted. “I wouldn’t sign it today.”

Wisconsin Democrat Mark Pocan also said in a tweet that the letter was written over the summer and held for release until now. “I have no idea why it went out now. Bad timing,” he said.

Directly engaging with Moscow as the now-retracted letter called for would mark a major shift from Biden’s strategy of providing billions in military and economic aid as talks with Russia have faltered in recent months.

House Republicans plan to put up a fight on passing Ukraine aid. Top House Intelligence Committee Republican Mike Turner of Ohio told reporters Monday that the end-of-year funding is going to be “the wild, wild west of spending” as Democratic lawmakers attach their final wish list of items during the upcoming lame-duck session.

“The problem with Ukrainian funding in the House is not Ukraine,” he said. “It’s all the things that are being attached to it that have nothing to do with Ukraine.”

It all comes weeks before the midterm elections in which Republicans could take over control of the House. Last week, House Minority Leader Kevin McCarthy told Punchbowl News that a Republican House majority in the next Congress would not support “a free blank check” for Ukraine as Americans face a recession at home.

Asked about the letter during her press briefing Monday, White House press secretary Karine Jean-Pierre said the administration is “very thankful” for the “bipartisan support” for Ukrainian aid it has enjoyed in Congress since earlier this year.

Jean-Pierre said she had not seen the letter but that the White House would “continue to keep those lines of communication open and continue to have conversations with members of Congress.”