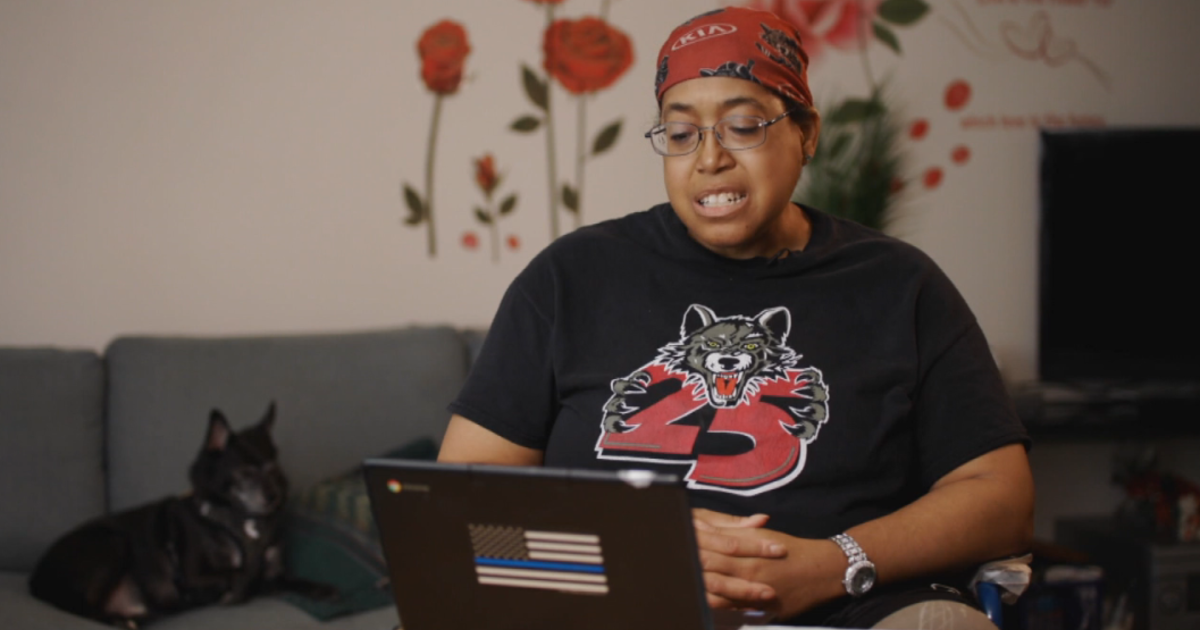 CHICAGO (CBS) — Facebook may have started as a way to connect to your friends, but now it’s a key communication tool and a platform for business. You can imagine when your access mysteriously gets cut off to all that, you’d be frustrated.

Meet an Aurora woman faced with just that at a time when she’s trying to get the word out about a deeply personal cause.

It’s the constants in our lives that keep us going, and Elana Newkirk has several; the daily walks with her dog Jake, her love of hockey (she’s a superfan with plenty of swag that shows it), and finally her health.

It’s a battle that’s been with her longer than she’d like.

“I’m getting ready to have my 65th surgery,” she said.

What that’s done is sharpen her voice as an advocate. She serves on Aurora’s Advisory Commission on Disabilities and has been spreading the word about a series of listening events.

“They’re trying to get a sense from the community. What are they doing right? What can be better?” Newkirk said.

The first is this week, and to boost attendance, she went to share the flyer on Facebook.

“I went to go share it, and before I even got there, Facebook said, ‘Ope, nope, can’t do that.’ Then they locked me out ever since,” she said.

Newkirk said she doesn’t know who, how, or why; but suddenly, she was kicked out of her account, unable to access it. She said she reported the issue to Facebook, and sent in identifying documents as requested to try and get her access restored.

“This was just a shocker to me,” she said.

But she’s heard nothing from the social media giant, so she’s locked out of one of her primary modes of communication.

That’s a kind of frustration we’ve heard before.

“I’m pissed, because my identity was stolen,” said Vera Waters, from Ashburn, who was scammed without any answers.

JoAnn Fakhouri of Oak Lawn, who did a lot of business through her Facebook account, got locked out of her company’s Facebook page – and even Facebook itself isn’t sure whether it’s a scam or not.

Both women, and countless others, have reached out to CBS 2 with their frustrations after days and weeks of difficulty trying to reach Facebook. When we’ve reached out to Facebook parent Meta, they’ve typically taken the information of the people we’ve profiled. Sometimes they get back in, sometimes they don’t.

It’s created a real hurdle in the relationships Newkirk has made online, and the kind of outreach she’s trying to do on behalf of those living with a disability. She feels caught, and we can only hope this story helps.

We reached out to Meta several times to raise the flag about Newkirk’s case, but they haven’t responded yet.

So in the meantime, we’ll do what she can’t, which is get the word about about Aurora’s Disabilities Listening Tour.

The meetings continue through May. For dates, times and locations, visit their website:

Marie Saavedra joined the CBS2 Chicago news team in October 2020 as an anchor. She grew up in Evanston and is a graduate of the Missouri School of Journalism.