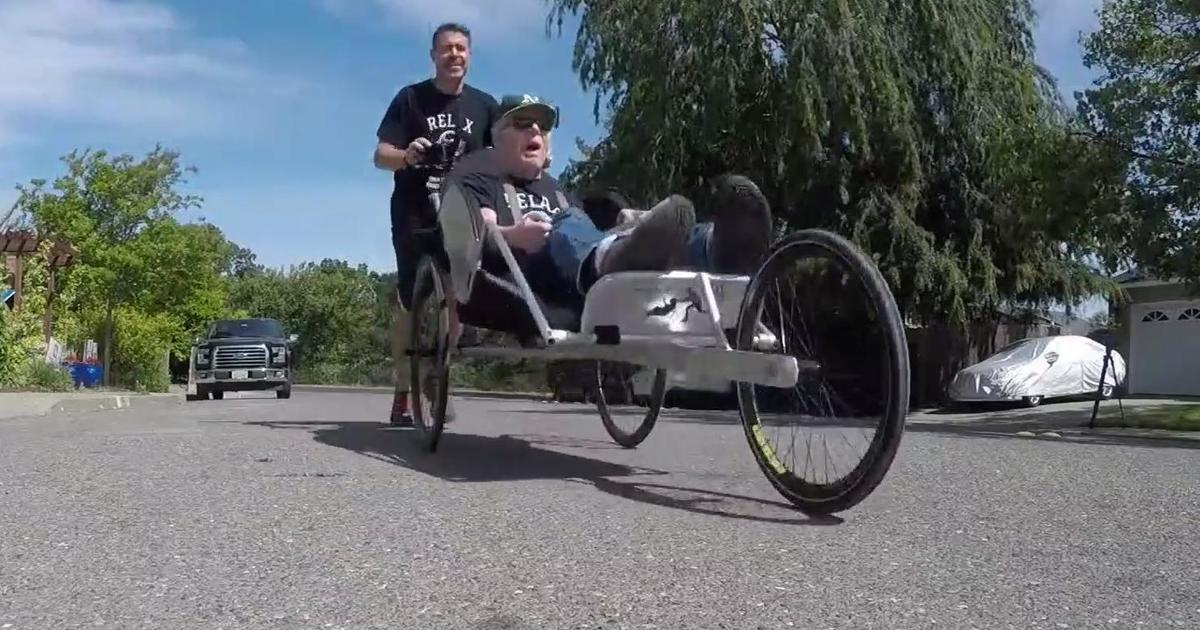 SAN FRANCISCO (KPIX 5) — An East Bay man who used to run the annual Bay to Breakers race in San Francisco, until a Parkinson’s diagnosis made him hang up his running shoes, will once again be crossing the finish line on Sunday after 20 years away from the race.

The euphoria of a good, long run is a distant memory to 78-year-old Dan Cochrane.

“I was a distance runner,” says Cochrane. “It was good to get out and clear out the mind and just let go.”

Cochrane’s dedication to running kicked into high gear in the 1970s. He started running in the Bay to Breakers event as a yearly tradition.

“The camaraderie, the feeling you get of participating in an effort with a big group of people, it’s good,” recalled Cochrane. “You get a lot of interesting people. It’s a good experience.”

Twenty years ago, Cochrane was diagnosed with Parkinson’s disease. This put his favorite pastime on the shelf.

“The doctor told me it was going to be a short period of time or a long period of time but that I would be in a wheelchair eventually,” he said. “I decided that I didn’t want to take that laying down.”

Still young at heart, Cochrane has a strict diet and sticks to routine exercise. He says this has helped him stay out of a wheelchair.

“You begin to realize that you don’t have the control that you used to have of your movements,” said Cochrane. “I think I am ahead of the game. We are 20 years into it and I’m still doing okay.”

He has been running his own race and is beating the odds, regardless of his diagnosis.

Cochrane is strong enough to play ball with his son but hitting the pavement for a distance run is no longer an option.

“It’s just too hard on my back,” states Cochrane. “I would like to try it but I know I can’t.”

This is why Cochrane’s son, Robert, figured out a way to get his dad to cross the Bay to Breakers finish line one more time.

“He is doing the best he can, he wants to be just regular Dan,” explained Robert Cochrane. “I want dad to know there is still hope.”

Every step of the way on Sunday, Robert will be there with his dad as he makes it through the seven-mile course across the city with the help of a running chair.

“All of a sudden the chair came and we were, like, we are doing this,” said Robert Cochrane. “So we have been on about three to four training runs and there have been some adventures.”

“I didn’t think I would be doing this again but we found a way to get us back one more time,” said Dan Cochrane.

One more time, with a physical push from his son, Cochrane is reignited with hope to once again feel that ‘runner’s high.’

“It feels like someone is behind you pushing,” explained Cochrane. “It is a real light feeling. It occurs, I don’t know when, I’m different circumstances when it has occurred before. But it really feels good.”

The father-son duo will be taking off with the final wave of runners on Sunday.

“I’m not going to be tired this time,” said Cochrane. “This is a new experience. I’ll still have a beer.”

Bay to Breakers is returning to an in-person event with 15,000 participants on Sunday, May 15 in San Francisco.