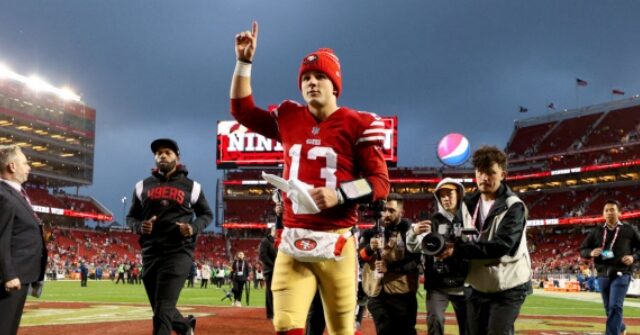 Rookie quarterback Brock Purdy of the 49ers has been open about his Christian faith and the identity he finds in Jesus.

Purdy saw himself thrust into the spotlight this past December after a series of injuries led him from a third-string position to taking on the Philadelphia Eagles in the NFC Championship this coming Sunday, putting the legacy team within striking distance of the Super Bowl. Purdy’s sudden rise to prominence has made him a candidate for the NFL Offensive Rookie of the Year Award.

Since Purdy led the 49ers to victory against the Dallas Cowboys last week, fans and newcomer fans of his have been taking notice of his past expressions of faith, according to CBN, telling Sports Spectrum in 2021 that he puts his “identity in Jesus.” He also talked about how he reconciled his football life with his faith in God.

“It was just a great reminder of where my identity is, where it lies,” he told Sports Spectrum. “And it’s in Jesus. And I continue to lean on Him. Again, the next day I didn’t go out and throw for 500 yards and was this awesome quarterback, but it was just this peace that I had with Him knowing that, ‘Hey, no matter what, I’m going to face moving forward during college football, God and Jesus are going to be my identity. And whatever I face, I won’t be shaken from it.’ I’ve got a great foundation in Him.”

Purdy also lists himself as a “believer in Jesus” in his Instagram profile. One post from 2021 featured a photo of himself pointing up at the sky with the caption: “The Lord is my rock, and I will not be shaken. I love you boys and will go to war with y’all time and time again.”

“The bottom line, my identity is in Jesus.”

49ers QB Brock Purdy with poignant words on his faith in Christ from August 2021 pic.twitter.com/PlNtmcngMZ

Purdy also cited his Christian faith after his first win with the 49ers, telling reporters back in December that he puts his trust in the Lord.

“You prepare as best as you can. You get better every single day at practice and once you get your opportunity, what are you going to do with it?”