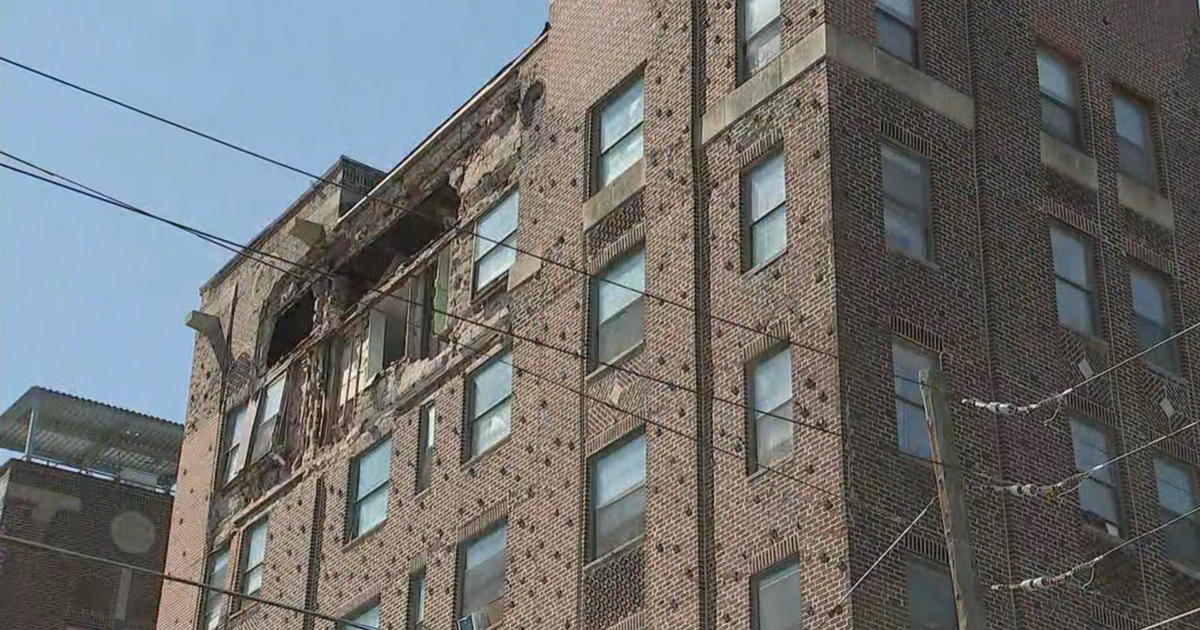 PHILADELPHIA (CBS) — An apartment complex in Philadelphia’s Logan section partially collapsed Wednesday, forcing officials to evacuate the building. Up to 60 people were inside the building at the time of the collapse.

They were forced to leave their apartments and rush outside when it happened around 9 a.m.

There are about 100 people displaced, and some of them are seeking shelter at Samuel Fels High School.

Chopper 3 was over the scene earlier in the day. Video shows part of the seventh floor’s wall caved in.

Bricks are now scattered all over Camac Street. No one was walking or driving by at the time.

Neighbor Edmund Lolley was cutting his grass at the time when he saw the bricks come down and crash onto the street.

Now, officials are working to figure out what led to this partial building collapse in Logan that scared many of those who live there and were inside at the time of the incident.

The building has been deemed unsafe until repairs are made.

The collapse scared many people who live in the area.

“We felt a boom and then a shake and we looked out and saw a wire shaking,” neighbor Schanell Woodson said.

Another resident was having a conversation with his uncle at the time of the incident.

“I’m sitting here, just talking to my uncle on the phone, and I’m like ‘Yo Mike, did you hear that?’ and he was like ‘Yeah, I heard that. What was that?'” Jason Freeman said. “It sounded like an explosion, then I looked up and I see the rocks falling. I literally see the rocks falling right now.”

The collapse startled many people who live here, like Doris Green’s son who has autism.

“I got a phone call from him saying that things were falling off the side of the building,” Green said, “and he was pretty terrified.”

Records obtained by Eyewitness News through Philadelphia’s License & Inspection department show the building had multiple violations since January. Some of the violations include fire safety general requirements and exit stairway doors.

The people who live there are not surprised.

“It’s a mess and it’s a danger and we need to be relocated and put somewhere safe,” Green said.

The American Red Cross is offering help to nearly 100 residents.

The Red Cross and the Office of Emergency Management opened a temporary reception center for residents at the Holy Trinity Bethlehem Presbyterian Church and gave them food.

They were then escorted by police in SEPTA  buses to Samuel Fels High School for shelter A trailer filled with cots and other items was brought in.

Residents will not be able to go back in until an engineer deems it safe. There’s no word on when that will be.

Neighbors say they saw a new HVAC system being installed at the building a few weeks ago as well as work being done on the top floor before the collapse.

CBS3 tried to contact the building’s owner, but the number listed for Lindley Towers has been disconnected.

Residents were unable to sleep in their homes overnight into Thursday.  It’s the second building collapse that happened in Philadelphia on Wednesday.

In Kensington, a three-story rowhome that had a pizza shop on the first floor and apartments above also collapsed.

The cause of that collapse is also unknown at this time.